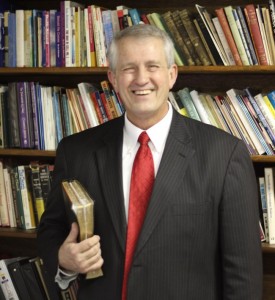 Pastor Dan Suttles was born on April 20, 1955 in Pigeon Forge, TN. He has lived his entire life in Sevier County with the exception of a six and a half year time which he spent in Longview, Texas where he attended Texas Baptist College under the ministry of Dr. Bob Gray. He graduated from TBC in May, 2005.

He is a 1973 graduate of Sevier County High School. He loves the mountains of East Tennessee where he spent most of his life hunting, fishing and just enjoying God’s beautiful creation. Pastor Suttles is an avid hunter and sportsman. God has given him a special love for people and a heart to help them. His driving desire is to see families bound together through God’s Word and to help them realize the blessing of God on their lives.

Preacher Suttles is an active soul-winner. He loves to share his Saviour with people. He has seen thousands trust Christ as their personal Saviour and over the years he has been privileged to witness the change which Christ makes in many of those lives.

Janie is his wife of 33 years. They have three adult children. John, who graduated from Hyles-Anderson College in 2003, is married to Sarah whom he met at college and they have four children. Jake, who graduated with his dad from TBC in 2005, is married to Charity and they have five children. Sarah graduated from TBC in 2007. Preacher Suttles had the joy of joining Sarah to Daniel Sola in marriage in July of 2010 and they now have one child. Pastor Suttles and his wife, Janie, through following the principles found in God’s Word and His blessing, wish to help other families realize the blessings of God in their homes.

Home can be a fun place. It should be a haven from all that the world throws at us every day.